What a night, I reckon i’ve watched the highlights 16 times at this stage, don’t let the media coverage fool you into thinking that scoreline happened because of refereeing decisions, i’ve never seen a team battered so bad for 90 mins with or without a man sent off.

Going into the game I was worried due to our last few displays and the fact that Southampton are always a headache at OT. All worry was gone 2 minutes in fortunately after the red card, what followed was something I havent seen all season from this team..intent to win without having to concede first, we smelled blood and went after them and got what we deserved. What Ole needs to do now is have us play with a similar attacking intent, not to the extent of yesterday since we basically abandoned covering the defence but with the belief that we can cause any defence in the league frequent problems.

Another thing I was mostly impressed with was the numerous different scorers, so often its Bruno and Rashford so it was nice for the rest of the team to get on the scoresheet. If we wanna challenge for the league this season its gonna need to be a full sqaud effort, so I’m hoping the likes of Martial and Cavani can start scoring more regularly now.

I never thought these words would come out of my mouth but Luke Shaw is currently the best LB in the league, better than the guy who made a career out of chasing down a goalkeeper and streets ahead of the guy who’s rated highly cause he wears a t-shirt in the rain. Shaw, after Rashford and Bruno has become the source of our best attacks, his crossing has improved massively, his passing and speed at which he releases the ball have also been upped, I’m still skeptical around his concentration, particularly for back post balls across the box but recently he hasn’t been at fault for any. He got two great assists last night and got a well deserved break at half time. 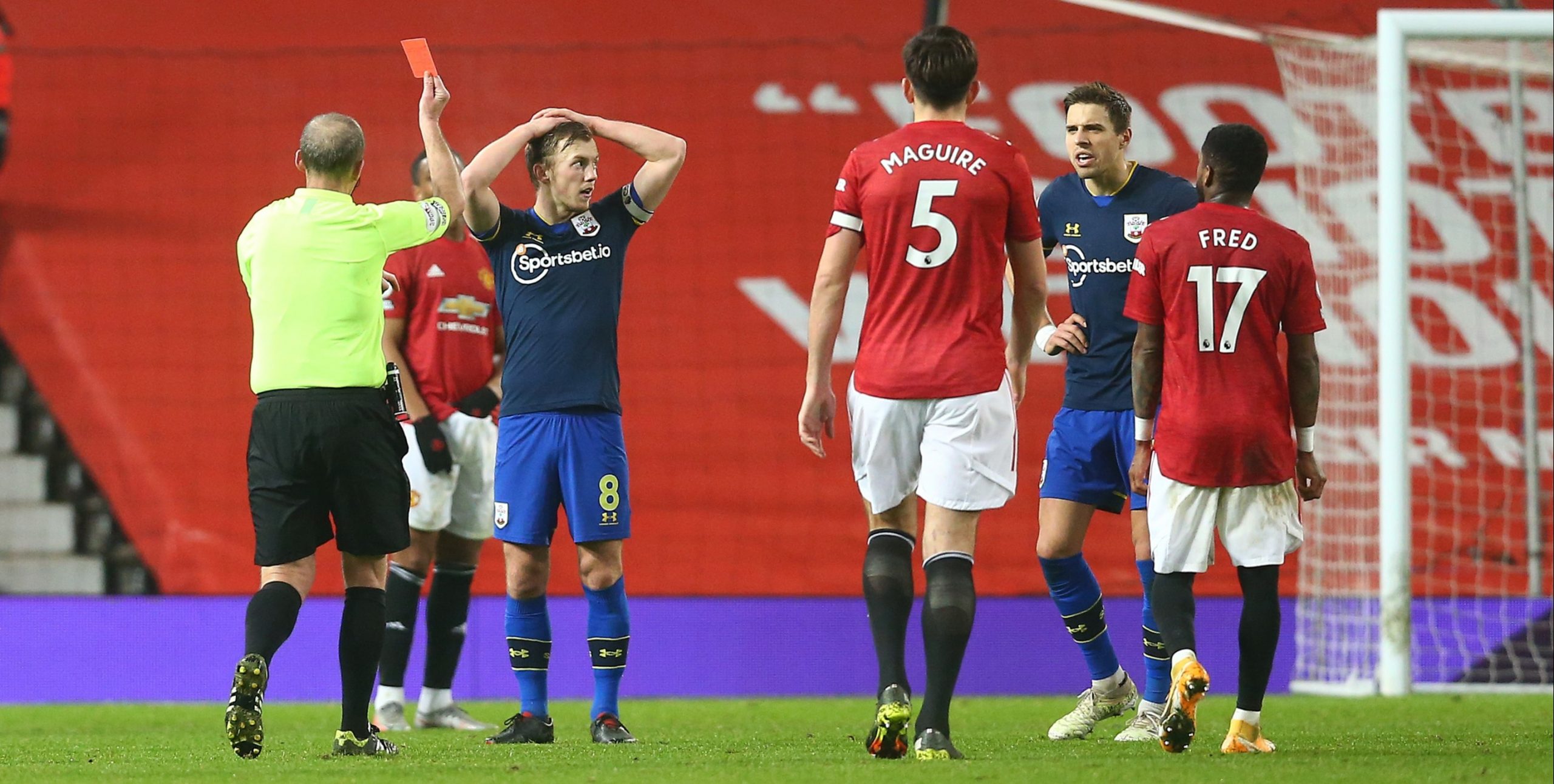 I’ve seen more people make a fuss about Bednarek’s red when the scoreline was 6-0 than I did when the referees came out and admitted they got both decisions wrong in the game against Sheffield(sigh) last week. The offside for Adams is one that we see every single week, it’ll happen to us next time, what’s the point moaning about the same thing week after week. As for the peno and red? Great decision if you ask me, just like Luiz earlier in the day the ref got it spot on, two clumsy challenges denying goalscoring opportunities.

De Gea – 7/10: Didn’t have anything to do but I thought was poor for the Adams offside goal.

AWB – 10/10: Goal + Assist and made a typical crucial last ditch challenge, i’m very critical of his footballing ability(first touch, passing) but one thing I know he can do is kick the ball ahead of himself, run down the line and put in a half decent cross, needs to do more of that and keep making these late runs into the box we’ve seen lately, he could pose a great aerial threat with the proper training.

Shaw – 10/10: Another world class performance, 2 assists and some other great chances created.

Fred – 7/10: Have always thought he’d make a decent LB, unfortunately he brought his ice skates instead of boots and was on the floor almost every time it came near him, slotted into new position decently and played one or two lovely balls however.

McSauce – 8.5/10: His energy meant that when Southampton tried to break he was on them in a flash, passed the well(suprisingly) and took his goal nicely.

Rashford – 9/10: Up to 28 goals and assists this season with yesterday’s goal and assist, sometimes his decision making baffles me but more often than not he’s the reason we win football matches, Ballon D’or 2024 pending, glad he got somewhat of a rest in the second half.

Cavani – 9/10: Took his header very well and made sure their defence hadn’t a second to breathe all game, he’s 33 yet runs more than any other forward we have, has to start every game for me.

Greenwood – 9/10: Had probably his best all round performance for us, his dribbling was great, passed the ball quick and early and created two goals, only thing robbing him of a 10 was a goal himself, him coming into form for the end of the season will be vital.

Martial – 9.5/10: I’ve been very critical of him but yesterday he looked immense, the ball was sticking to him for the first time in months, he was making runs and took his goals very well. Need him to do that now consistently till the end of the season and recapture last season’s form, I expect 12 more league goals from him.

Donny – 8/10: With him in the team we’re always gonna keep the ball, love his link up play and excited to see more of him as the season unfolds.

James – 8/10: Fairplay to him, he got a second prem goal of the season( more than some teams franchise player), against deep blocks he’s usually useless so for him to put in a respectable performance is great to see.

This will probably be the most positive article I ever write, I pray this weekend against Everton the positivity continues and it’s not back to doom and gloom, GGMU!