Nicolas Pepe, Arsenals most expensive transfer coming in at £72M. That is serious money for a guy that had one good season in Ligue 1. The price tag will always be mentioned when you hear his name. 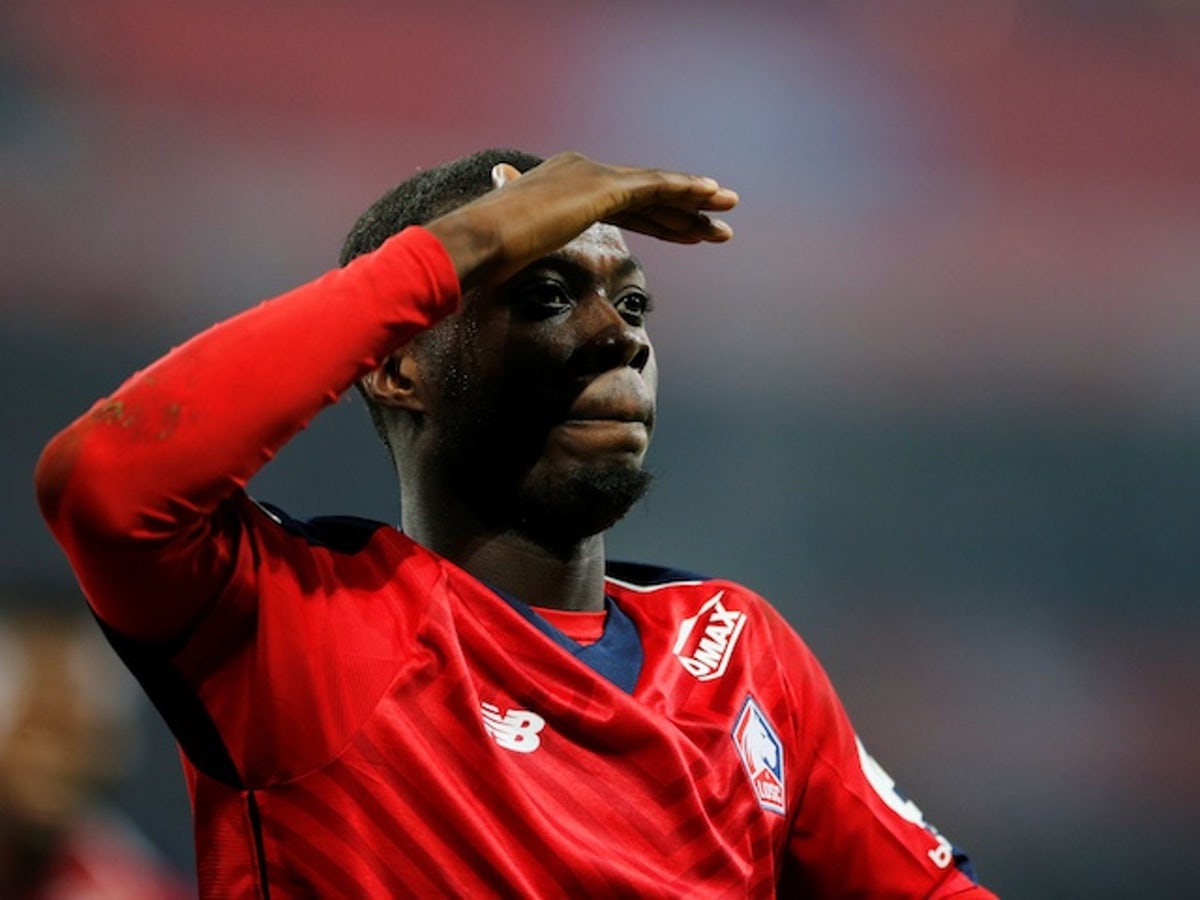 I’ve been following Nico since last year February when he was lighting up Ligue 1 with Lille, every week I’d look at the scores for Lille and there he was Nico either scoring or assisting in most games he was playing. He ended that season with 22 goals in the league and 11 assists. These stats are incredible even if it was in Ligue 1 and because of this a lot of the top clubs in Europe were keeping an eye. This included the likes of Arsenal, Napoli, Liverpool, Bayern and Manchester United. 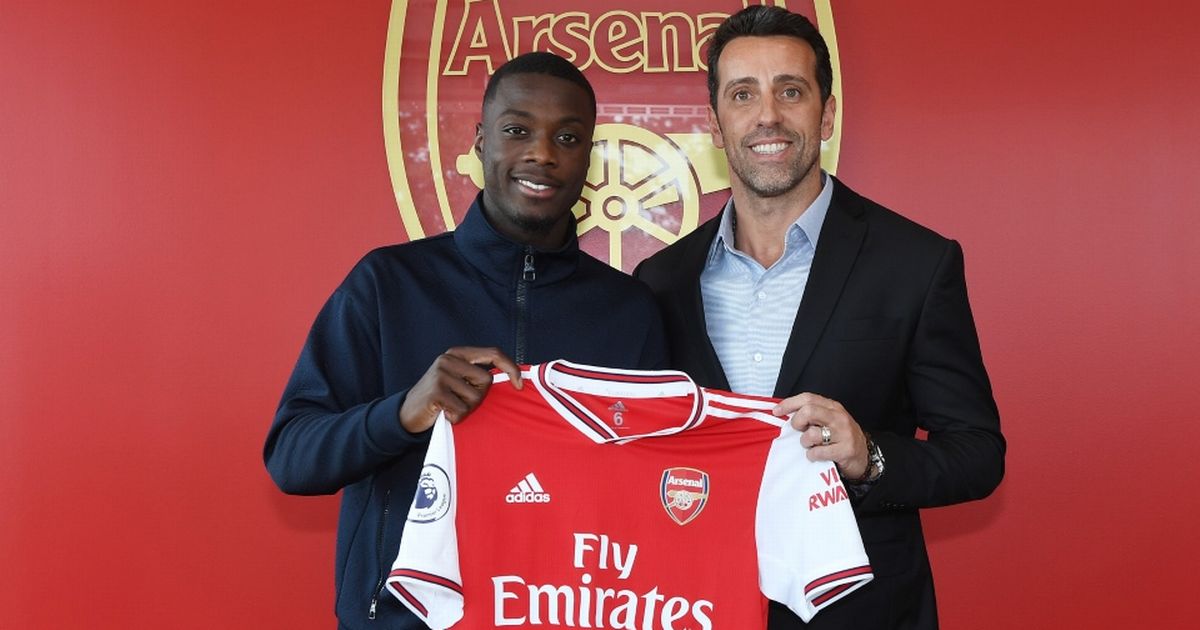 As the weeks passed by clubs began to drop out of the race to get his signature. Bayern had scouted and considering signing him but felt like he wasn’t good enough and that says a lot, Bayern aren’t signing you unless you’re a top talent, they have serious standards. The 3 clubs it came down to were Arsenal, Napoli and Liverpool, based on what I seen through social media Liverpool were very interested but because of the how good their wingers in Mane and Salah were he would most likely be an option coming from the bench. This leaves us with Arsenal and Napoli, these two clubs have had transfer targets hijacked from both sides. No offence to Napoli but who wants to go be playing football in that backwards racist country. Living in London, playing in the Premier League, playing for the Arsenal, good wages that is attractive for any player regardless of how Arsenal are doing at the moment. 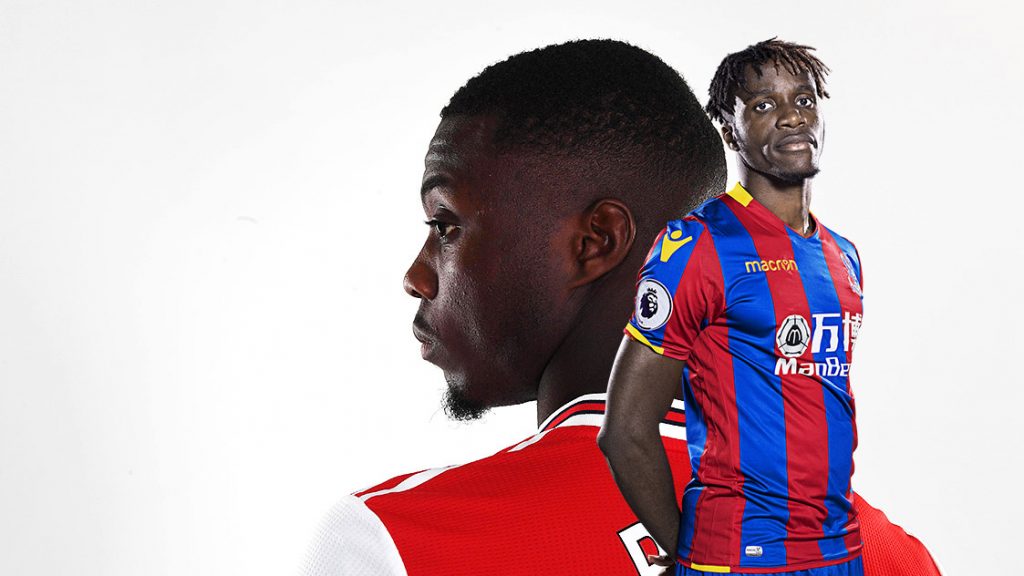 Raul Sanllehi who was the Head of Football at the time was the one that orchestrated this deal. Unai Emery who was also manager at the time wanted Wilfried Zaha based on how he toyed with us whenever he played against us but Raul vetoed this because Pepe was seen as the future of Arsenal. Emery said “We signed Pepe. He’s a good player but we didn’t know his character and he need time, patience. I favoured someone who knew the league and wouldn’t need to adapt”. “Zaha won games on his own: Tottenham, Manchester City, us, incredible performances, this is the player I know and want, I met Zaha and he wanted to come”. “The club decided Pepe was one for the future. I said yes but we need to win now and this lad wins games, he beat us on his own”. 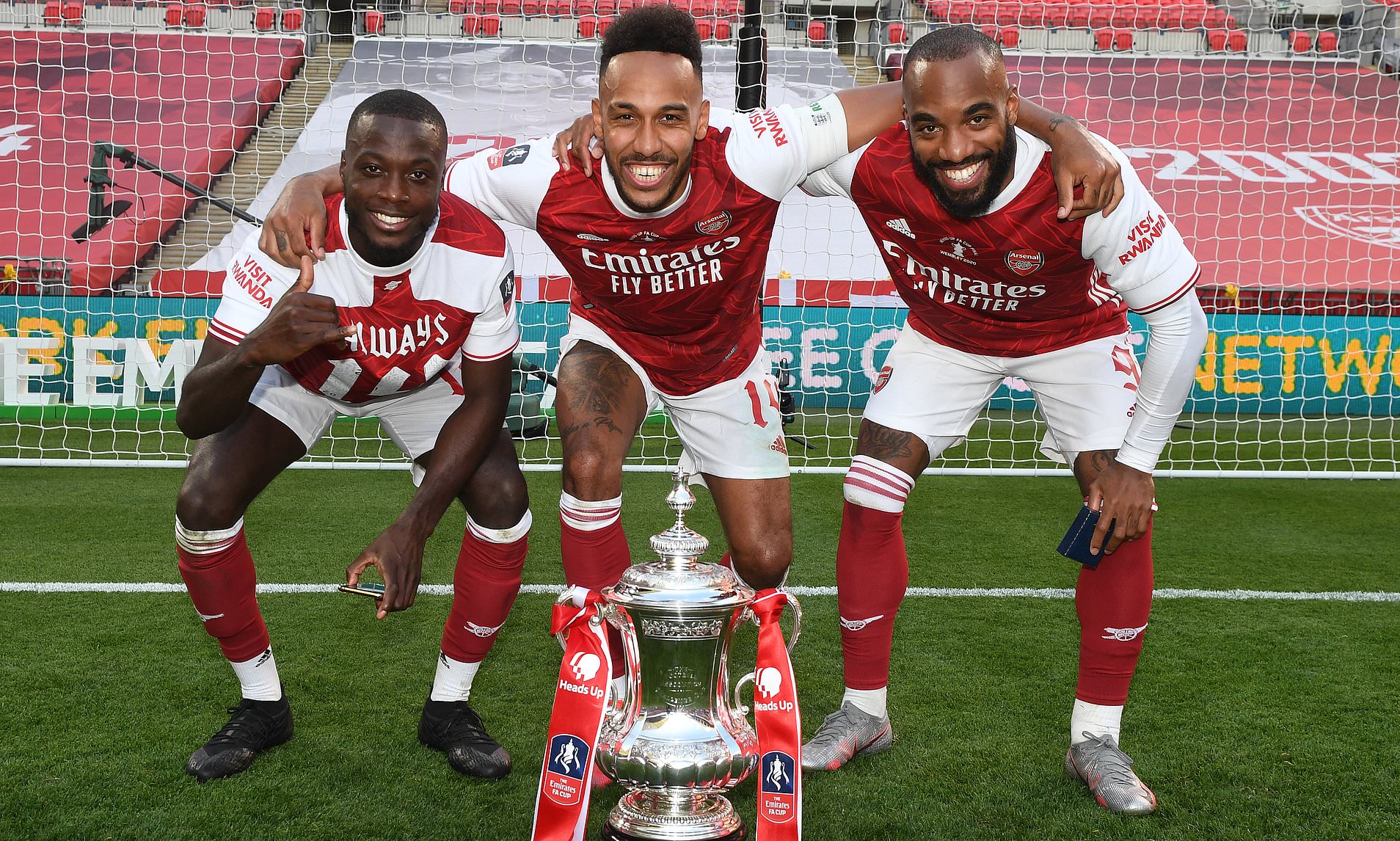 When Arsenal finally signed Pepe, everyone was gassed and excited that we have another talented goal scoring winger. Pepe was asked before which defender would he be afraid to face and he said no one, if you see this guy, he can take on anyone with ease his dribbling is on another level. But what’s the use of having elite level dribbling if you can’t convert it into goals. Pepes first season was underwhelming to say the least he had glimpses to show why we signed him but majority games he was on the bench making academy minutes appearances or didn’t play at all, he’s played under 3 different managers as well and that doesn’t help. He did have a good FA Cup run as he was very influential in that run so props to him. The league is where it mattered the most, he only scored 5 goals and 6 assisted which isn’t bad but we expected more. In all comps he got 8 goals and 10 assists. 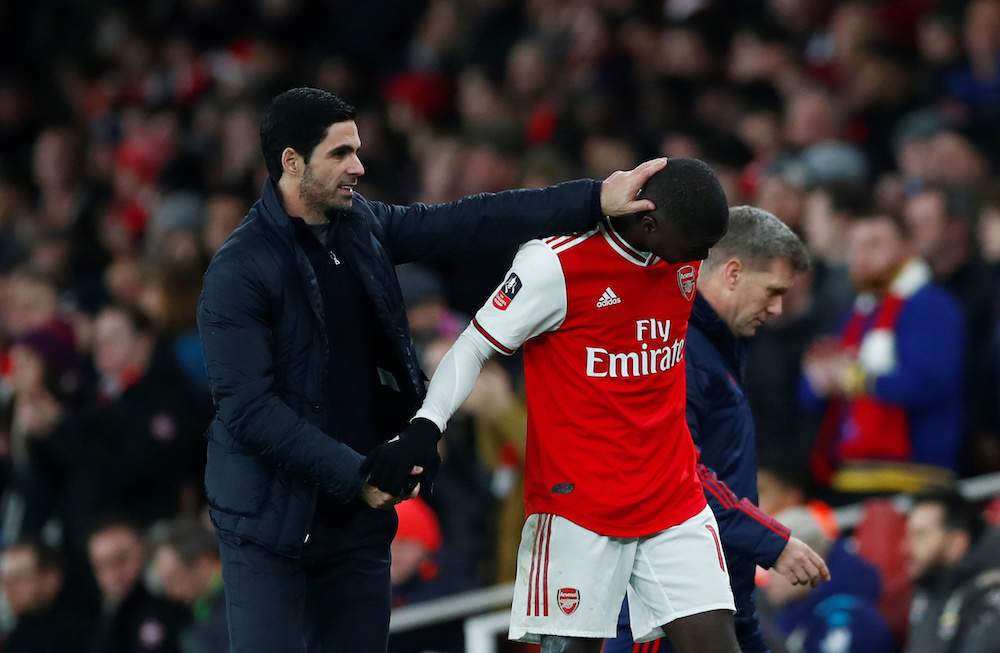 Halfway through his second season, Pepe has still yet to fully secure a starting spot but he’s starting to shine in that LW spot because Saka has taken over the RW. In my opinion he needs a run of games and this was shown when he scored in back-to-back games coming from the left. Arteta can coach him into a player capable of terrorizing defences as he did with Raheem Sterling and Leroy Sane. That’s all I have to say on Nicolas Pepe, Arteta has to show him love and care and start him consistently and Pepe will repay him back.

Vote in our poll below and check out our most recent posts too! For more Arsenal content click here.

Loading ...
Premier League
Agenda FC: Premier league Player Of The Year
Posted onMay 19, 2022May 19, 2022
With the season coming to an end it’s time for the end of season awards, starting off with our Premier League player of the year! There’s gonna be 6 nominees ...
Chelsea
Que sera, sera. Whatever will be, will be. My trip to Wembley
Posted onMay 13, 2022May 13, 2022
Chelsea Invitational March 19th, we beat Middlesbrough to make the FA cup semi-final, 4 times in 5 years. It may as well be called the Chelsea invitational at this stage. ...
Chelsea
Tremendous Tommy Tuchel: Oh, What A Terrific Time
Posted onApril 28, 2022April 27, 2022
Time In Germany So, before I start let me just say, this year’s champions league final will be the first competition, and only one so far in which Thomas Tuchel’s ...
Arsenal
Arsenal 21/22: Arteta’s Remontada
Posted onMarch 28, 2022March 28, 2022
Been a long time since I’ve written an article about Arsenal so why not write about how the clubs performances this season. Arteta was backed with 150m pounds of the ...
Specials
The Death Of The Entertainers
Posted onFebruary 28, 2022February 28, 2022
Football for me is an art, not just a physical sport played by 22 men on a football pitch. Football in many ways is like life, it offers us many ...
AFCON 2021
AFCON 2021: Wonderkids
Posted onJanuary 18, 2022February 28, 2022
Welcome back to another piece on AFCON 2021, this time we’re taking a look at some of the best wonder kids on display at this year’s tournament. Let’s begin! Samuel ...
AFCON 2021
AFCON 2021: A Look At The Favourites
Posted onJanuary 7, 2022January 7, 2022
1
In this article I’m gonna be taking a look at who I believe are the top five teams competing in AFCON this year. Before that if you haven’t already, please ...
AFCON 2021
AFCON 2021: Everything You Need To Know
Posted onJanuary 6, 2022January 6, 2022
2
We’re back with out first article of the year and what better way to start than with an AFCON preview. We’re gonna run through everything you need to know for ...
Specials
Jose Mourinho: Top 10 Greatest Interviews
Posted onDecember 1, 2021December 1, 2021
1
Been wanting to do this article for quite awhile and thoroughly enjoyed it, today we’re counting down the top 10 interviews from football’s favourite villain, Jose Mourinho! Enjoy! 10. “Minute ...
Chelsea
Chelsea vs Man United Match Preview: One More Loss?
Posted onNovember 25, 2021November 25, 2021
We have to lose Another weekend of Premier League football means another weekend of me rooting against United. You’re probably wondering why since Ole’s already been sacked. Unfortunately the people ...
Man Utd
Manchester United: It’s Over
Posted onNovember 1, 2021November 1, 2021
I had began writing this article last week then said nah, but this morning’s Spurs/ Conte news has pushed me over the edge. They said last Saturday’s game was a ...
Premier League
The Top 10 Premier League Managers Of All Time
Posted onSeptember 17, 2021November 1, 2021
155
Back with our first countdown of the season, this time we’re counting down managers. As usual the focus of these countdowns is mostly on what I’ve seen first hand so ...
Premier League
Premier League: Early Season Thoughts
Posted onSeptember 10, 2021November 1, 2021
21
With the international break almost over (thankfully), I thought I’d give my thoughts on the first 3 game weeks of premier league football as we head into match day 4. ...
Premier League
Premier League 2021/2022 Preview
Posted onAugust 14, 2021November 1, 2021
118
We’re Back After a nice(but short) summer break, premier league football is back upon us, which means agendas must be ran. We’re gonna start with a preview for the season ...
Euros
Euro 2020: Young Ballers To Watch
Posted onJune 16, 2021November 1, 2021
378
After a short hiatus we’re back with some Euros content, firstly focusing on the hottest young talent at the tournament, lets get into it! Alexander Isak Alexander Isak is a ...