Football for me is an art, not just a physical sport played by 22 men on a football pitch. Football in many ways is like life, it offers us many ups and downs, however on many moments it can give us moments of unforgettable joy. That joy is what I want to speak on today, on how football is becoming less instinctive and more robotic, there is less margin for creative freedom as patterns of play have ruined any space for creativity and dribbling.

We are seeing less and less the entertainers of previous years in modern football the likes of Mesut Ozil, Ronaldihno, Riquelme, Zidane and even in past years in premier league football, players such as Eric Cantona, Di Canio, Gianfranco Zola and Matt Le Tissier.  Players who at any given moment could change a football match with a flick of the boot or step over, faint and even a Rabona. Players who the crowd gravitated towards, players who the crowd would looking forward to seeing on the weekend after a mundane week in work of the same repetitive nature, they knew that on the weekend they would spend their hard earned money on a ticket to something they don’t normally see on a regular basis. Players who take you off your seat.These are the entertainers who kids dream about replicating there moves whether it be the famous flip flap by Ronaldihno which causes the commentar to gasp along with the crowd.

These are moments which in some cases show more then goals. Which after matches get people talking about the moment which is timeless. Long gone are the days where you would get these entertainers or even mavericks who were given the freedom to express themselves on the pitch, to do as they pleased, to delight us with wonderful moments of magic, with mesmeric runs and fancy passes. The instinctive nature which we grew up playing football on the streets is gone, players aren’t encouraged to dribble anymore, to take a player on see, see what defensive metal a defender has.

The pressures and the analytic data now available to us have ruined the beautiful game as every touch of the ball is analysed heavily, as there will be stats made up of how many times the baller touched the ball, how many times the player lost the ball, which puts so much pressure on players that no more are the days of managers telling players to just go out and play and enjoy yourself. XG and G/A are rampant in the game as eye tests and tbeautiful football is no longer encouraged, the game is becoming faster and less melodic, patterns of play are becoming too important to the point every touch of the ball in the final third is planned with barely any room for creativity. 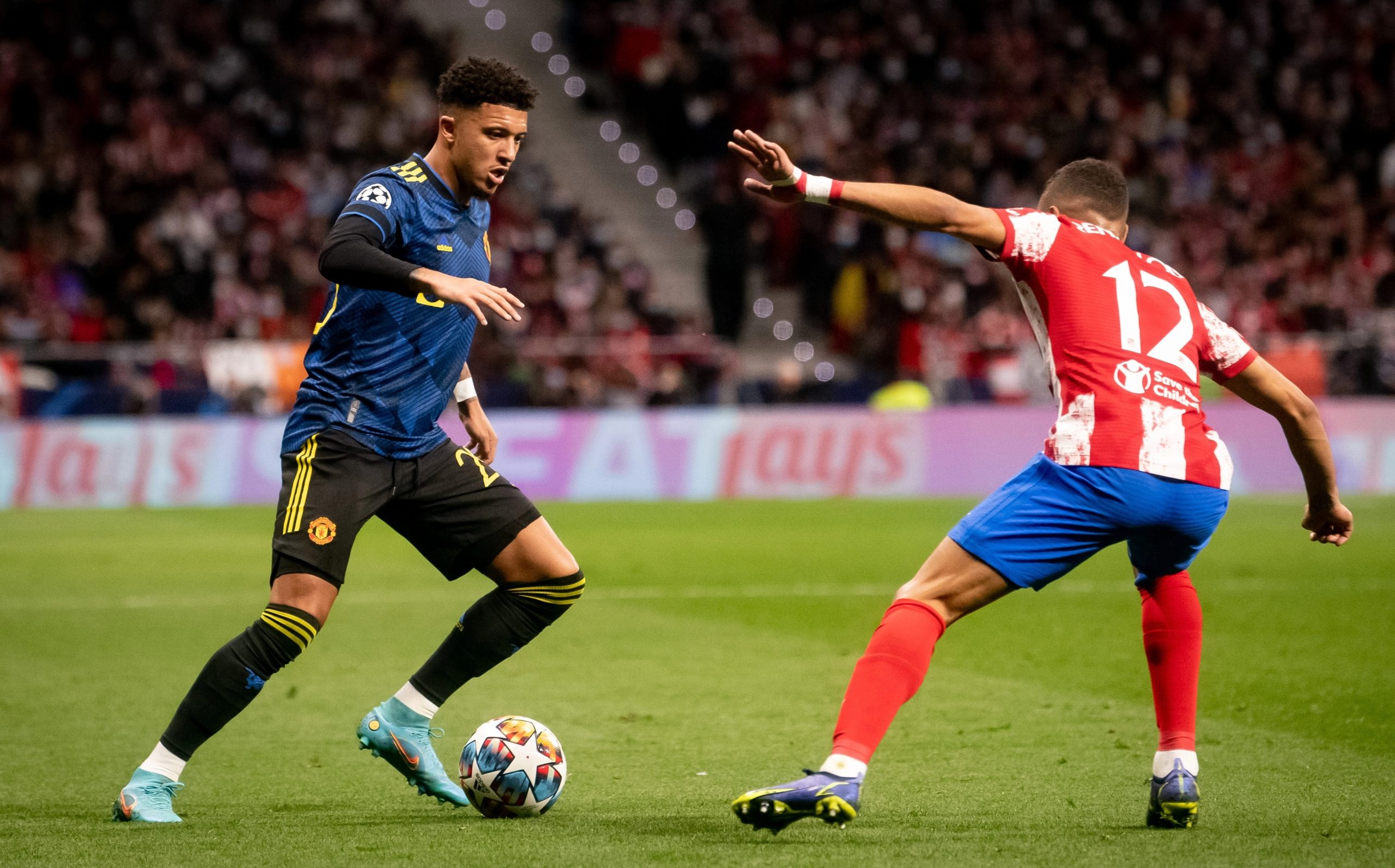 However there is some hope as players such as Mahrez, Jadon Sancho, Kylian Mbappe and of course Neymar who I believe is the real last entertainer we have in world football, are players who when they touch the ball, you don’t know what to expect but you know you’re going to see something special.These are the players who’s moves you want to replicate for your Sunday league team or even while your playing cage football at your local astro park.  They say everything in life goes around in full circles and I hope that the world of football sooner rather then later the public starts appreciating the entertainers that exist in our beautiful game as the two greatest players of all time Messi and Ronaldo near their retirement, will we ever see two players who scored goals and entertained simultaneously again? That’s a question we’ll have to wait to find out. I hope we can also enjoy these phenoms while we can because I’m really sure we’ll never see anything like these two every again.

It wouldn’t be right to do this article without mentioning some of my favourite entertainers over the past years, players who when they were playing I had my eyes peeled and ball at my feet, ready to copy and to replicate there every move and faint. 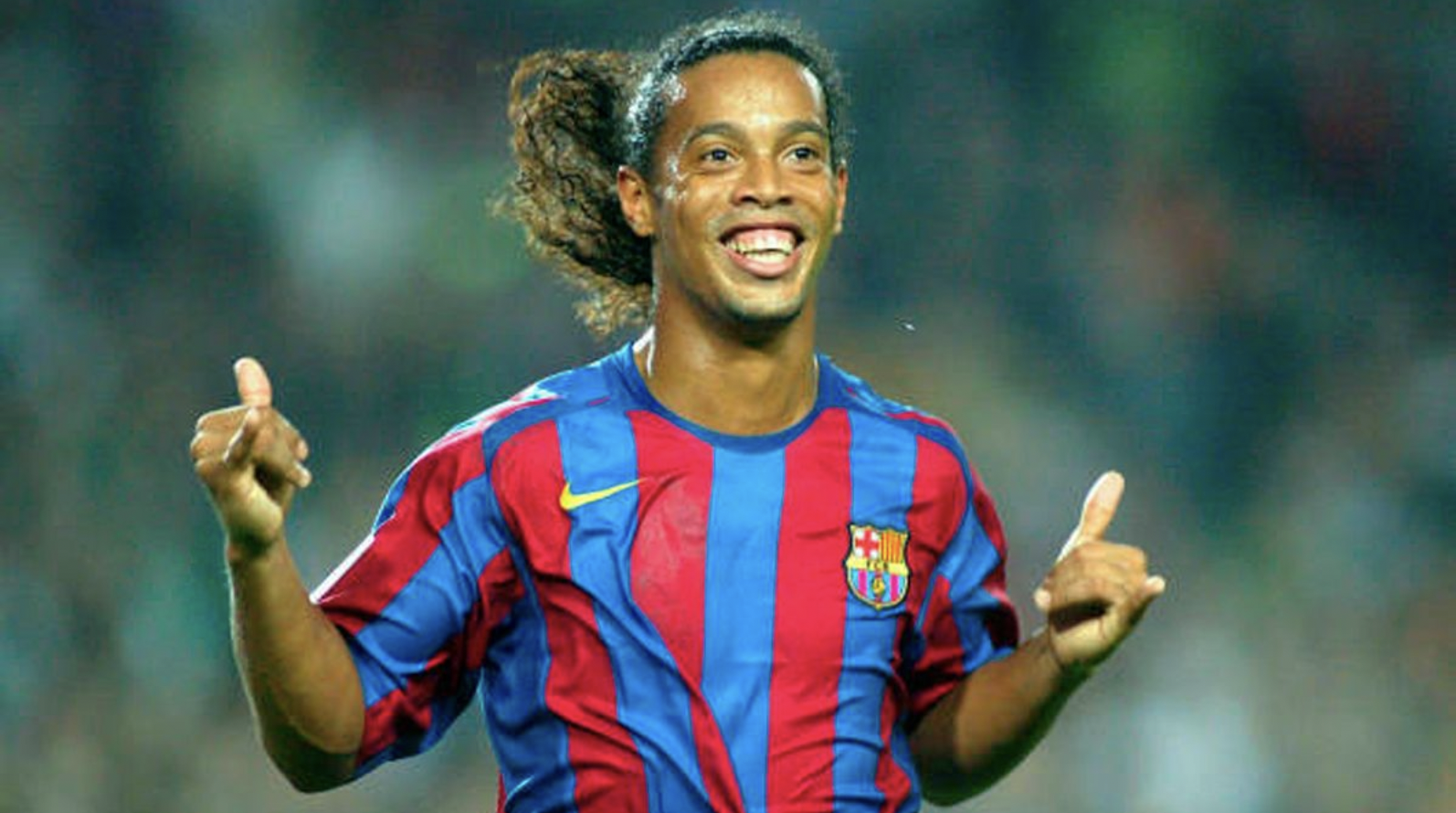 The Godfather of Joga Bonito, a man who could do it all with the ball at his feet, the smiling assassin. Prime Ronaldihno is easily up there with the best footballers of all time, in his pomp no footballer gave us such joy and laughter with the ball at his feet, with his flair and skill on the ball. Ronaldihno had a unique dribbling style of running at players with a sort of jink and dink like a young Mohammed Ali dancing across the dance floor with his float like a butterfly sting like a bee rhythm. Watching Ronaldihno play you could easily turn off the music and add in Samba music in the background and the two would go together wonderfully. He truly captivated the world of football with his football magic and done things to this day that I’ve never ever seen any player replicate. Name me another footballer you’ve seen stand up 2 world class defenders toe poke a football from the edge of the box and made it look so easy?

Finally to conclude on The Godfather, the beauty of this man is that he’s been playing like this all his life and it’s telling when Eric Cantona mentions in the end of the video “Never grow up” which is evident in this video as you can tell from early that Ronaldinho never grew up and changed his style. 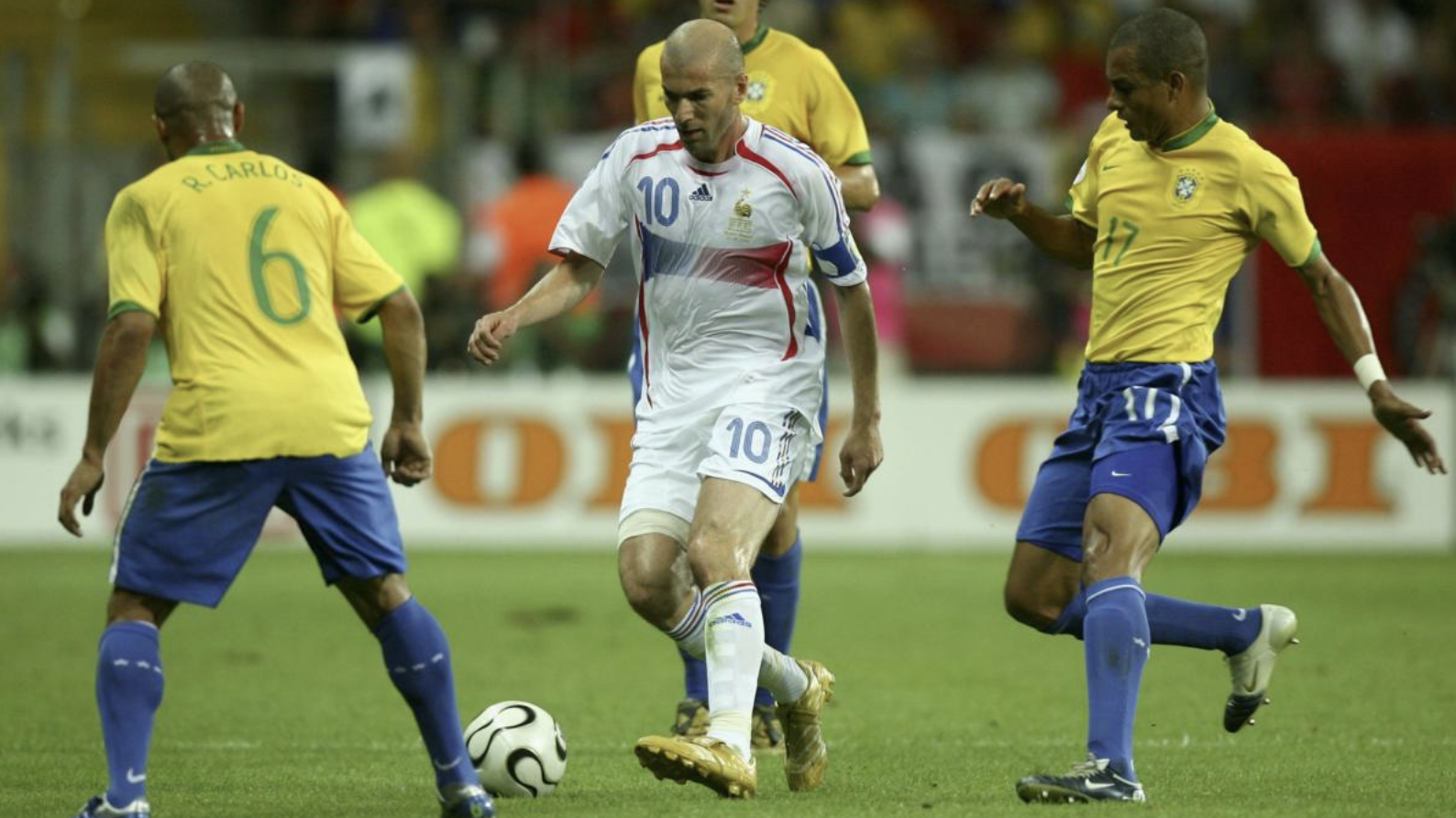 The name itself is an introduction, a man who played football like Velcro was stuck to his foot, Zidane played football different to everyone else. His pirouette was constructed like Leonardo Da Vinci’s artwork, everything Zidane done was just so immaculate and perfect. The way he dribbled towards defenders in a straight line and would throw step overs in such a melodic fashion I was convinced the defenders were lured into a special trance or spell. Zidane was a wizard, probably the best technician of all time. Give him the ball anywhere any angle he will bring it down with ease as this video shows, it may be the best control of the ball ever seen.

True genius shows no age as Zidane showed at 34 with this beautiful performance against Brazil in 2006 World Cup quarter final so please sit back and enjoy true artistry.

Last but not least.. 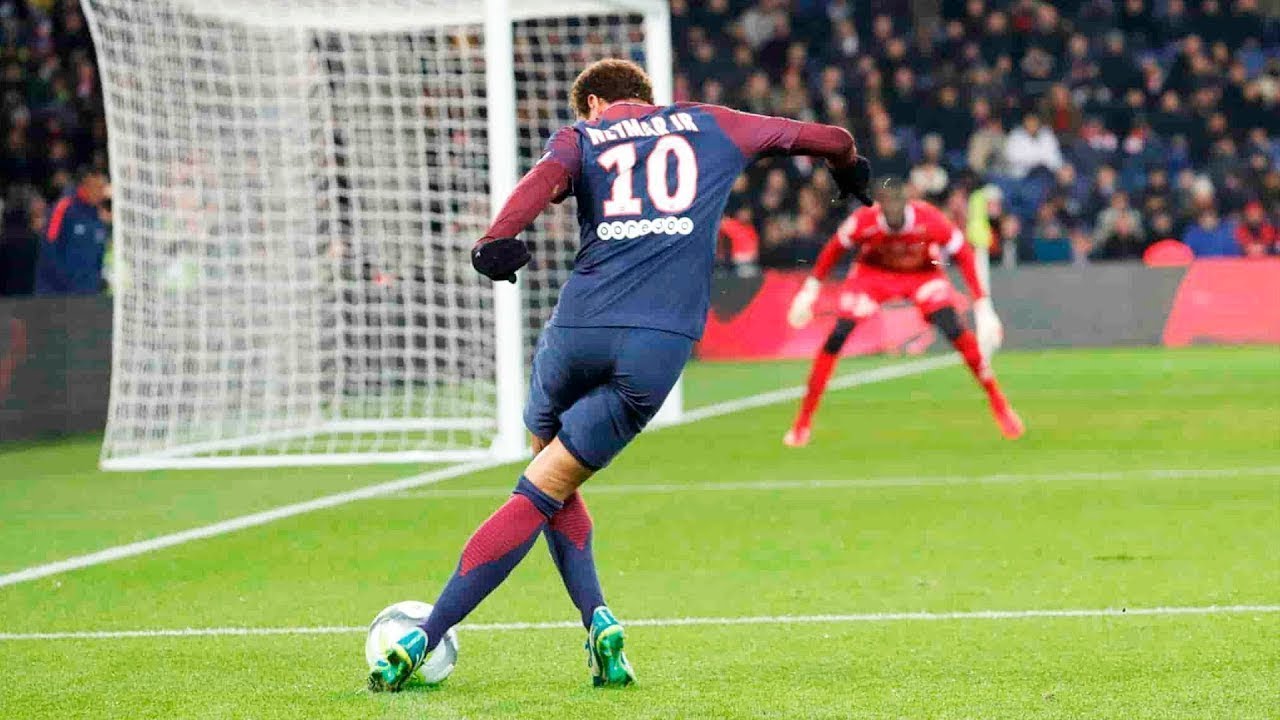 Neymar turning 30 this year makes me feel really uncomfortable and relatively sad, as I basically grew up watching Neymar as he developed from a YouTube sensation to a Superstar, others may be wondering why I haven’t included Ronaldo or Messi but if we’re really talking about entertainer’s in modern football, Neymar is number one. Neymar is the reason why I still to this day I try rainbow flicks at any given moment I can, to the disbelief of opponents, team mates and even my manager but I don’t care it’s called the beautiful game for a reason and Neymar represents that to the fullest. Neymar has the full repertoire of skill and creativity he is a freestyler come footballer as some of the things he does with a football are actually outlandish, he dribbles up to his opponents with his left foot and dashes off with his right and vice versa.

When Neymar is on form he’s a scary sight in football, I feel Neymar goes on the football pitch with his main concern being too entertain which may be his downfall, but as viewers of football it’s great to see. Neymar isn’t appreciated as he should be in my view and as he reaches the later stages of his career, I’m afraid we wont see another Neymar again so I advise us football lovers to appreciate every heel flick, no look pass, Rabona and step over of this genius while we can. I’m going to leave you guys with two clips which for me show why he is the best and most enjoyable football in world football, I hope he isn’t the last entertainer we have.

There’s no way you guys thought I could do a post on the death of the entertainers and not mention these two freaks of natures. They may not be at the peak of there powers anymore doesn’t mean here at Agenda Fc we won’t celebrate them. I present to you two of world football greatest entertainers. In two of my favourite versions get ready. 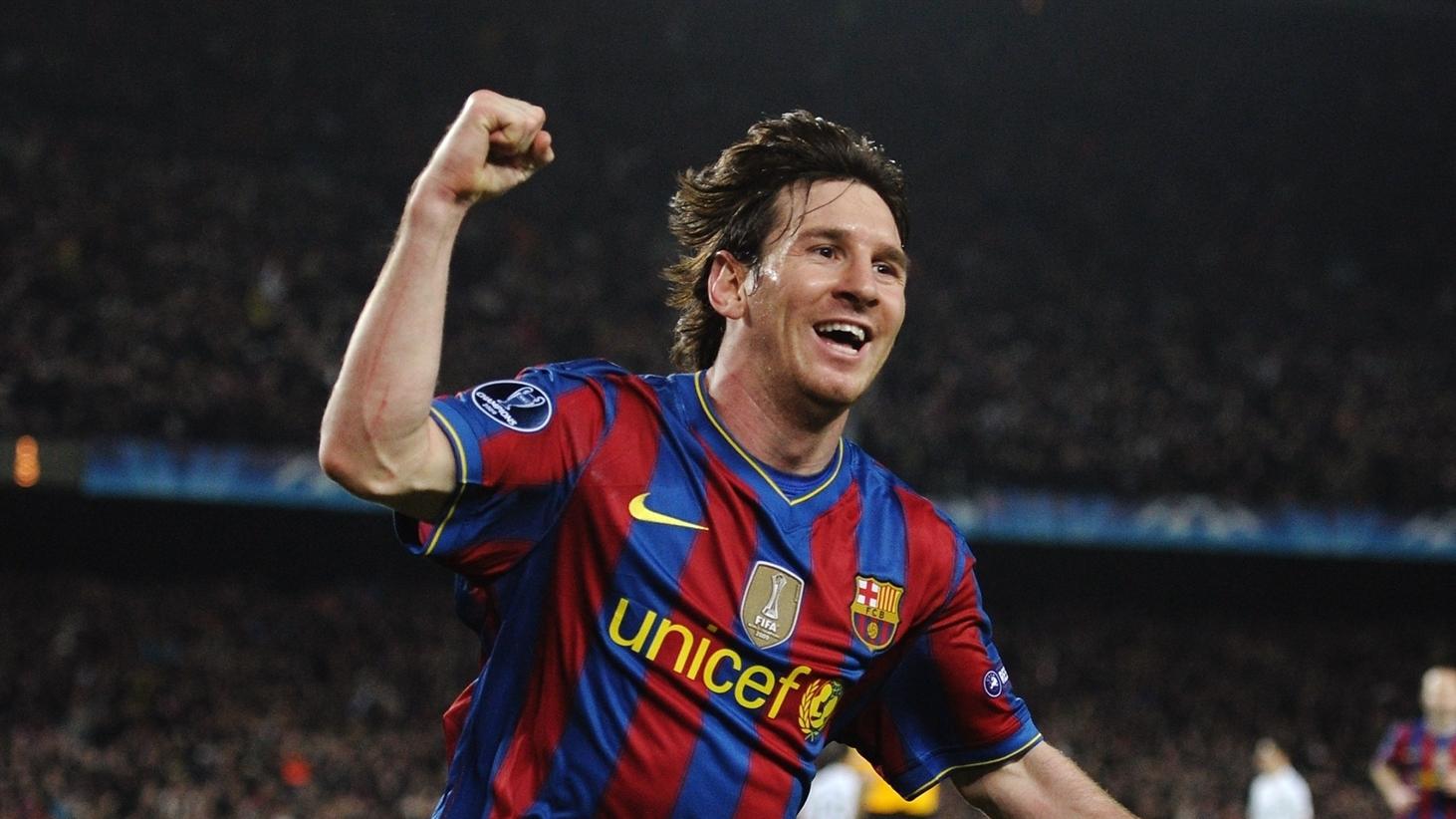 Messy Coconut Head Lionel Messi, is a figure made in the gallery of marvel characters as this guy was a assassin, similar to Peter Parker as when you see him in his glasses and daily wear you think this guy can’t be a superhero no way but when he puts on his costume the guy turns into a mystic superhero similarly with Lionel Messi, looks like an average guy but when he puts on his Barcelona kit you know the game was already over. The King of the La Gambeta, Messi’s dribbling is similar to the Argentina tango in which he dribbles with the flow of his body to deceive defenders to move whatever way he wants them to go and then glides away, he beats you with his genius and outsmarts you like a master pick-pocketer, stealing from guilty and naive tourists, Lionel Messi has made every defender look silly, the sight of Messi standing them up and dribbling towards them can make or break careers just ask Jerome Boateng…

Here are some of my favourite Messi moments 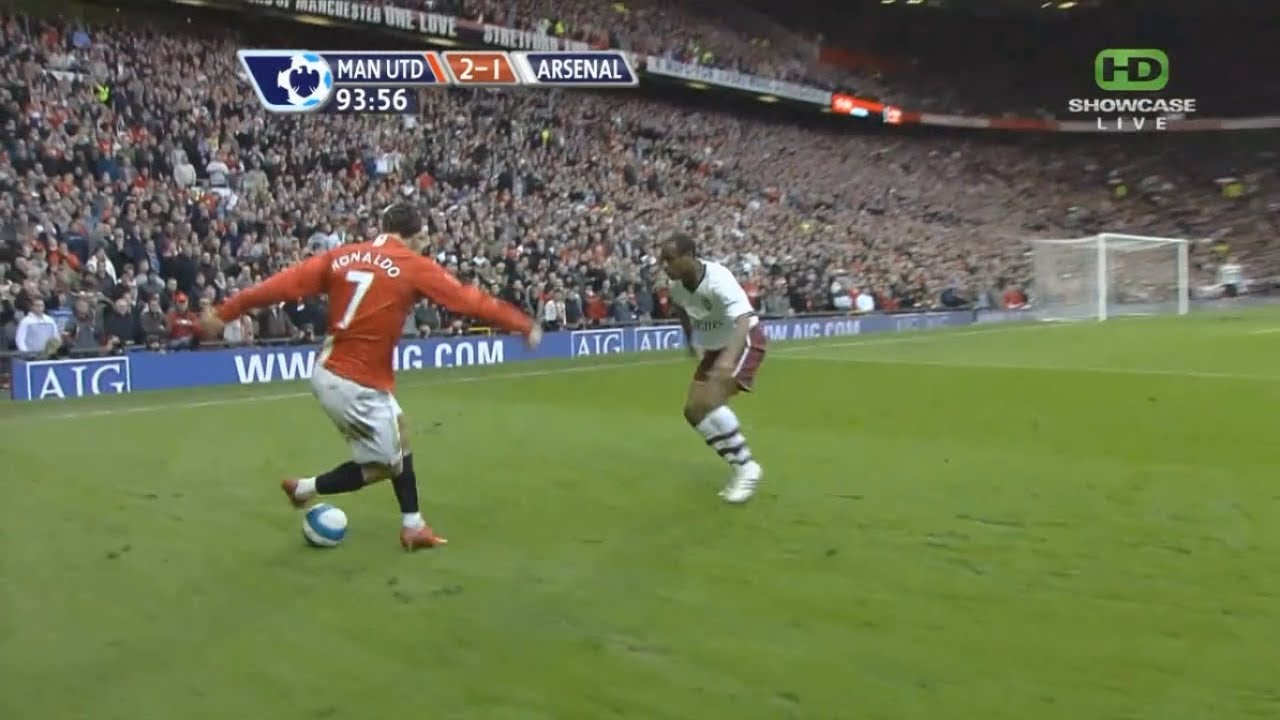 This version of Ronaldo really was Viva Ronaldo, everything about him was iconic from the mercurials, the perfectly gelled hair and chiseled physique, if Ronaldo wasn’t a footballer you wouldn’t be surprised if he was in the entertainment business. The kids of today don’t remember how deadly and entertaining this guy was from his step overs, mazy runs and ridiculous shooting with either foot, he dropped the jaws of premier league fans week in week out with his amazing skills, his dribbling style was similar to a Cheetah galloping with such speed and elegance down the wing along with the steps of a ballet dancer tip toe’ing across the dancehall, he could go either way, was strong in the air the man could do it all, only man I know to make Ashley Cole do the splits, yes you heard me right do the splits. I can go on for time speaking about Cristiano, he gave us too many memories that we will cherish forever in our hearts. All I can well and truly say Viva Ronaldo.

This picture sums up Henry, simply on another planet to everybody else, as the infamous quote says Chess not Chequers he drummed to a different beat to nearly everyone he was on the football pitch.It was like watching a older brother play against his younger brothers friends on the school playground just this time Henry was doing this against grown men professionals even world class players making it look so easy. Simply genius if you had the pleasure of watching Thierry then you know were in for a treat, I’m not gonna bore you with Henry analogies as I’m an Arsenal fan and could truly go all day and speak about my underlying love for Henry, but I won’t, maybe another time so I’m just gonna share some clips of this genius at his work.

Thank you for reading this post, if you made it this far you are a true football lover and purist and wish you all the best in your future endeavours.

Special mention to League of Irelands Chris Forrester for this special moment of magic: